The Coffee Lifeline Project blossomed when Peter Kettler of Holland Midwest read an article entitled “Hard Times for Ethiopia’s Coffee Growers.” This article stated that “Local coffee collectors appear to be taking advantage of the growers’ lack of knowledge,” and as a result, “most coffee farmers are not making enough from their basic crop to meet the most basic cash needs of their families.” Peter quickly discovered that this problem is directly related to the fact that when the closing prices of the various commodities markets are broadcast daily on the Ethiopian national radio network, only two percent of the estimated 700,000 coffee farmers have access to a radio.

The Coffee Lifeline Project is partnered with Freeplay Foundation, who’s philosophy states that information, education and communication are the keys to social or economic progress. It is the first program to utilize self-powered radio technology to serve coffee growers’ needs. According to its founder, Peter Kettler, “It uses simple technology to empower producers through access to information and education, as opposed to being tied to a revenue stream. It is a tool that empowers farmers by increasing their capacity to shape their own future through education, and as a result, it increases a producing region’s chances of becoming truly sustainable.” The first Coffee Lifeline Project has taken root in Rwanda. According to the Freeplay Foundation, “With sustained radio access, coffee farmers no longer will be subject to market price deception conveyed by ‘coyotes.’ Farmers will be able to learn the most updated agricultural techniques to improve coffee productivity.” As one coffee farmer told Freeplay, “Now I can listen to news all over the world. I can learn about my country and what is going on in the administration.” 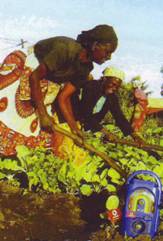 The radios are distributed to groups of 10 to 20 people, therefore creating several community groups that can “discuss issues and ideas presented in various programs and decide best how to integrate a plan of action.” The cost of sponsoring a radio, including delivery into a farmer’s hands, is a mere $55.

“The specialty coffee industry can be proud of the many initiatives that seek to improve the futures of our producing partners,” says Peter, “My hope is that the coffee community at large will help give birth to this inaugural project.”

Contributions to the Coffee Lifeline project can be made out to Freeplay Foundation and sent to 3010 Progress Rd. Madison, WI. 53716. Peter Kettler can be reached at peterk at hollandcoffee.com