The Red State with the most coffee shops? Arizona 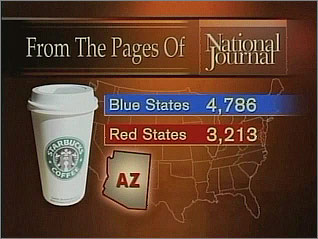 Frankly this study makes no sense. I think it’s silly and probably ignores the huge number of independent coffee houses across the country. Nevertheless, I’m happy to report that among all of the “Red” states, Arizona leads the pack in number of coffee shops (probably counting only Starbucks stores).

For the full scoop look to Media Matters and watch the video clip and read the article.

Ifill said “there are nearly 4,800 Starbucks coffee shops in Blue States, but only 3,200 in Red States,” giving “Democratic coffee drinkers nearly twice as many chances to snag a Frappuccino than Republicans get” on a per-capita basis. Finally, Ifill noted that, per capita, Arizona is the “Red State with the most coffee shops,” and speculated: “Maybe that explains [Sen.] John McCain [R-AZ].”