I was in Scottsdale yesterday and so I decided to stop in and visit the new Cappucci Coffee Bar which is a part of the Ostrovsky Gallery. I don’t think very many people know about it yet, because I was the only person there… and it was about 9:30 in the morning.

Actually, I must say that the barista who was there (all by himself) was brave enough to tell me that he didn’t know a lot about coffee preparation. It was probably because I asked for my typical doppio macchiato. And he didn’t quite know how to make that. Kudos to him for admitting that he didn’t have the coffee expertise. He told me that he isn’t the lead barista and was by himself for a few hours.

I was in a good mood and struck up a conversation.

After some quizzing I discovered he could make me a mocha which he did with great gusto. Afterwards, he was curious about making a macchiato for me and so I walked him through making it. The results were average, as you could expect for a newbie making espresso. The shot was poured way too fast due to an inadequate tamping job. They did have a grind-per shot though (using Illy).

Ok, enough about the coffee. I can’t call this a definitive review because frankly the main barista was not there and he said they were hiring and having a very difficult time finding applicants. If you’re a barista looking for a gig, you should look them up. If you want great coffee now, you should probably look elseware until they work out the kinks.

The space is quite amazing. Considering it is a part of an art gallery, they’ll have a big crowd on summer nights and weekends. Their are two spacious leather couches and plenty of other seats that look comfortable. I asked and they do have free wireless internet (and I saw plenty of electrical outlets). 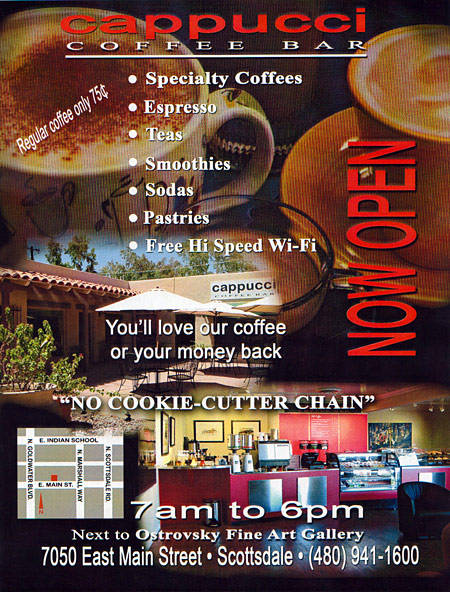