Another coffee chain is set to storm the valley — Dutch Bros. Coffee. Some of you have already seen the Tempe store (photo below from dutchbros.com). 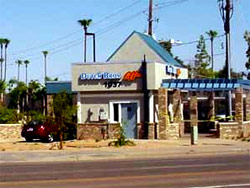 The newspaper saves me the trouble. Here is the rest of the story.

A chain of coffee drive-throughs popular in the northwest is coming to the Phoenix area.

Oregon-based Dutch Bros. Coffee company hopes to have seven sites in the Valley over the next couple of years, including two in Phoenix.

The first Dutch Bros. Coffee opened in August in Tempe. Building is expected to start in mid-December at Bell Road and 29th Street. It will be on the south side of Bell Road west of Arizona 51. It’s mostly a drive-through, though there will be seating for walk-ins, said Jim Thompson who is developing the stores in the Valley.

Thompson is working with Phoenix officials and hopes to have a drive-through near the light rail stop at Camelback Road and Central Avenue.