I thought this would be an interesting topic for discussion: Cold-brewing coffee. I know there are a few people in town that make coffee this way. What do you think?

If you are unfamiliar with the process, or even just want to read a good article on the topic, visit the NY Daily News site. 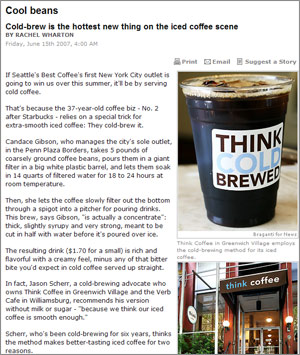 Candace Gibson, who manages the city’s sole outlet, in the Penn Plaza Borders, takes 5 pounds of coarsely ground coffee beans, pours them in a giant filter in a big white plastic barrel, and lets them soak in 14 quarts of filtered water for 18 to 24 hours at room temperature.

Then, she lets the coffee slowly filter out the bottom through a spigot into a pitcher for pouring drinks. This brew, says Gibson, “is actually a concentrate”: thick, slightly syrupy and very strong, meant to be cut in half with water before it’s poured over ice.

The resulting drink ($1.70 for a small) is rich and flavorful with a creamy feel, minus any of that bitter bite you’d expect in cold coffee served up straight.

In fact, Jason Scherr, a cold-brewing advocate who owns Think Coffee in Greenwich Village and the Verb Cafe in Williamsburg, recommends his version without milk or sugar – “because we think our iced coffee is smooth enough.”

First, he says, you’re not “going back and forth between extreme temperatures,” leading to a “bitter and over-extracted taste.” And the long, slow, cold brewing process means he’s “being as gentle with the bean as possible,” resulting in that velvety feel.

There’s science at work, too, claims Brett Holmes, a partner in Toddy, the Texas beverage company that makes the low-tech cold coffee brewers for coffee shops and regular Joes.

A smaller, home Toddy is $29.99 at Seattle’s Best, although MacGyver types could always rig up their own filter system.

Cold water extracts 67% less acid from beans than hot, says Holmes, meaning less bitterness and less trouble for those with tender tummies. Still, while 9,500 coffee shops nationwide use Toddy as “their little secret,” says Holmes, it’s been mostly under the radar in New York until now.

Beyond Think, Verb and Seattle’s Best, the only two Toddy shops he knows are Full City Coffee on the lower East Side and Ciao for Now in the East Village.

Scherr has a good idea of why it hasn’t yet caught on commercially: The buckets take up space, each filter costs $1, and you use more coffee per cup than brewing it hot.

“But if you ever had it,” he says, “you would definitely understand why we do it.”

Of course, there are caveats, say coffee geeks, who’ve long posted reviews of cold-brewing on sites like www.coffeegeek.com. Like any food, coffee is a subjective thing, meaning some like it smoother and creamy – the Seattle’s Best style – while others like bite sometimes associated with Starbucks.

But however you like it, iced coffee is definitely hot now.

Read the rest of the article here.