Jackie’s Java Coffee (Phillippines and also in the Middle East) 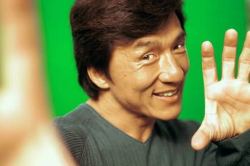 Jackie Chan is opening a line of coffee shops in the Philippines and also in the Middle East. The espresso is sure to be a rush.

I hope he isn’t rushing into things. Chan he do it? I think he can, and he is, and it’s called Jackie’s Java Coffee.

i immediately thought of Coffee Rush, here in Arizona…

Jackie Chan may be unstoppable in his career as an international star but in his role as a businessman trying to open a chain of Jackie’s Java Coffee shops in the Philippines, he has met a stumbling block.

At Jackie’s recent press conference for his new movie, “Rush Hour 3,” we asked the star if the first coffee shop in the chain is open in the Philippines. He flew to the country a year ago to launch the first international franchise of his Hong Kong-based coffee shop chain.

Jackie, who is always an entertaining interview subject, often stood up, sang, danced and dished jokes at the press con. The comedian-action star’s limited English is part of his charm. He replied to our question like a good storyteller would, saving the punch line in the end. “I had a one day holiday. They (Manila investors) said, ‘Please come. We have a lot of people waiting for you.’ I got a private jet. We flew even though there was a big typhoon. I got there, said hello to everybody and flew back (to Hong Kong). Then Java sued us.”

“They sued you?” one of our colleagues asked him.

“Yeah,” he answered. “They said you cannot use Java (in my coffee shop name) so we stopped.” Jackie did not offer specific details on who or which entity is trying to prevent him from using the word “Java” in the name of his Starbucks-style coffee shop chain. There is a business entity already named Jackie’s Java that’s registered in Colorado. Could this be the firm that’s suing to prevent Jackie from using the name, Jackie’s Java Coffee?

When we followed up on the subject, the multitalented star replied, “We are in negotiations right now. If I cannot use Java, I will call my chain Jackie’s Waja Coffee (laughter). But I want Java in the name. No Java Waja, no Cha Cha. I can use Cha Cha Wawa, yeah.” Did we tell you he’s amusingly silly too?

Apparently, the use of Jackie’s Java Coffee as his chain’s name is being legally challenged only in the Philippines. Jackie, who operates other businesses, revealed, “This year, we will open 20 in the Middle East and Africa. The investors joked that nobody would bomb a Jackie Chan coffee shop (laughter). I said, ‘Oh, is that right?’ They said, ‘Yeah. Because everybody loves you.'” (After the press con, Jackie did tell us that he’s aware and appreciative that many Filipino moviegoers love him.)

He announced, “We are also opening a few in Malaysia and Singapore. On Jan. 1, 2008, we will open the first one at the Beijing airport. Our Shanghai branch is opening soon, too.”

Read the rest of the article here.