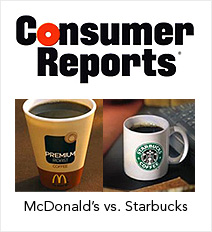 By now you’ve all probably heard about the Consumer Reports taste test that concluded that McDonald’s coffee was better than Starbucks.

I know you have heard of it because everybody is emailing me about it. McDonald’s probably loves this news, since they’re hoping to gain a foothold in the coffee market.

I can’t tell you the last time I had coffee from McDonald’s since it’s been so long since I’ve stopped there in the first place. Apparently they serve over a billion cups of coffee a year, though.

I’d like to see McDonald’s serve me a macchiato.

The magazine says McDonald’s Premium Roast Coffee has “no flaws,” labeling it “decent and moderately strong.” The java from Starbucks, meanwhile, was determined to be “strong, but burnt and bitter enough to make your eyes water instead of open.”

“We assemble panels of at least six testers to taste the coffee under tightly controlled conditions,” said coffee consultant Willem Boot, who trains tasters for the Coffee Quality Institute in Long Beach. “Doing only two samples in this case is crazy.”

— LA Times (thanks to TOMAS for sending this link)

You can discuss this in the Arizona Coffee Forum, as well.