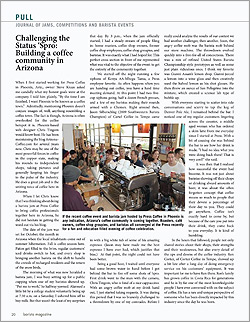 In October of this year Press Coffee hosted the 2009 Arizona Barista Jam which drew baristas and coffee enthusiasts from all over the state.

I took photos at the event and Tom Maegdlin wrote an after-action-report which he submitted to Barista Magazine. Fast forward to today and Arizona has been featured!

You can view the current issue of Barista Magazine for free online. Make sure you are reading the December / January 2010 issue. Jump to page 20 where the article begins.

It was then that I realized how successful the event had become. It was not just about baristas showing off their chops or drinking absurd amounts of beer; it was about the often forgotten concept that coffee means so much to people that they devote a percentage of their day to you. They could go anywhere. Coffee isn’t exactly hard to come by, but because of the care you put into their drink, they come back to you everyday. It is kind of humbling.
— Tom Maegdlin 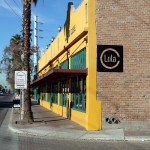