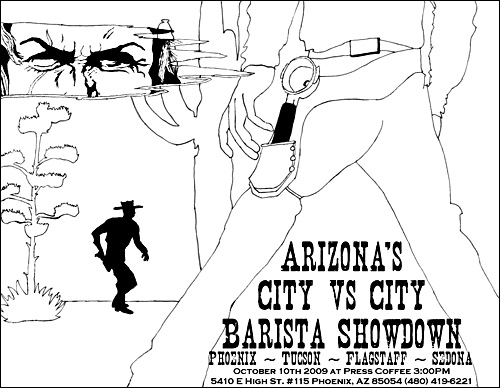 Tom Maegdlin from Press Coffee is working on a statewide barista competition. Tom sent in this poster along with a few specifics. Tom has arranged for the event to be covered in Barista Magazine this November.

I got the idea from Scott Lucey of Alterra Coffee in Milwaukee. Scott is USBC third place finisher and Great Lakes Regional Barista Champion. He organized the first City V City with Chicago and Milwaukee on June 6, 2009. (Milwaukee won by the way 😉 ) This proves its not always the big boys who win so that’s why I’ve been telling the Phoenix guys to look out and avoid being cocky. Here’s the link to that story:

The event is going to be held October 10th, 2009 (3:00pm) at Press Coffee in Phoenix, Arizona. The competing cities will be Flagstaff/Sedona, Tucson and Phoenix. Each city will choose between 5 and 10 baristas to compete. I may go toward the higher end of competitors depending on whether or not I can get the more sparsely populated regions to produce competitors.

The competition format will be:

10 minutes performance and 5 minutes of clean up.

The scoring will be relative to:

These criteria will be the basis for the individual score and the the cumulative city score. There will be an individual winner and a winning city. I am in the process of finding 2 independent judges preferably from out of state. 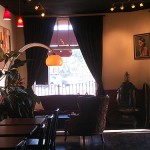