A number of local shops are serving Organic Barista Milk as part of their lineup. Have you tried it? What do you think? Some shops are charging a premium since it is a little bit more expensive.

Liberty Market has said it will begin serving Barista Milk in early September and eliminate whole milk. It looks like they’re having it sourced locally, according to Joe Johnston.

Sola Coffee Bar seems to swear by it. It is served as a choice there, with usually a markup (but it’s worth it).

Giant Coffee serves Barista Milk (they said they were the first in AZ to serve it, but as far as I know that’s incorrect).

Seth Mills, who is a coffee roaster at Cartel Coffee Lab says “We ran into some issues with Strauss barista milk. We initially loved it, but its difficult to steam and can taste chalky…”

One of the first sources of Organic Barista Milk was the Strauss Family Creamery.

So, have you tried it? What do you think? Which shops are serving it? 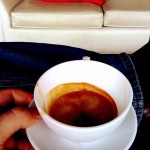