Royal Coffee Bar has opened a second location at the Biltmore shopping center. They announced the opening this morning on Twitter.

OFFICIALLY open at the Biltmore! Come by and enjoy a beautifully prepared coffee!less than a minute ago via web

Rumors of this location opening have been coming for a while, but only recently was the spot discussed and mentioned on Twitter by @matthewpetro, @brian_clemens, and @sirobins. They have apparently been waiting for about a week to open due to inspection delays (gossip).

I’m excited about visiting, and checking it out! Royal will be located on the south side facing Camelback Rd. near the Ralph Lauren (thanks for the directions, @sirobins!)

Update: The Arizona Republic visits and adds some details.

Does anybody still use email? Previous
Rhino Caffe Next 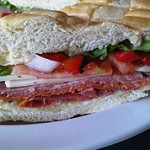