Lola’s Coffee at The Yard to Close

If you have been reading the food blogs, you’ve probably already heard that Lola’s at The Yard will be closing on Sunday. They have announced that they’ll be reopening later this fall as a new-concept. They haven’t said whether they’ll be keeping the name, however.

They posted an announcement on their web site.

Lola’s at The Yard only opened about 6 months ago.

A reader wrote in with some interesting tidbits. The most interesting is that they’re no longer serving Lola Coffee beans, but instead are using another roaster. For some reason, the relationship with Daniel, of Lola Coffee (3rd Ave & Roosevelt) ended just two days after opening. There must be a story there.

Provision Coffee was providing coffee to Lola’s at The Yard, but for some reason that relationship has also ended. Lola at The Yard apparently only had enough coffee on-hand to make it until Saturday afternoon.

Some other comments from the same reader: They’ve gone through 8 head chefs, stopped making their own baked goods, and have had problems with partners, chefs, and coffee providers. While The Yard (Culinary Dropout, Little Cleo’s) is a Fox Concepts location, Lola’s at The Yard was not; it was just a tenant.

Supposedly they’ll be reopening again in 3 weeks, so we’ll see what happens! Thanks to our reader for the tips! 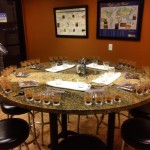