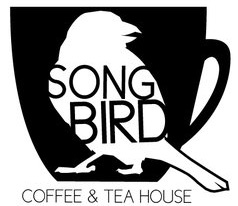 I’ve been intending to write a longer form essay about Songbird Coffee & Tea House, and just haven’t gotten to it. With this post, I’m hoping to help share some of the awesome things about Songbird I’ve discovered.

Songbird is the favorite coffee shop of many Arizona Coffee readers, and I am frequently asked to share my thoughts about Songbird. People love this coffee shop. The great coffee aside, I think people love it because of its location and friendly environment. When the owners of Songbird talk about community, I think what they’re referring to is the nature of the place, and how they want people to feel as if they are a part of Songbird’s story.

They’re doing really great things with coffee at Songbird Coffee. Songbird’s coffee beans are from Cortez Coffee Company (based in Tempe, AZ). On each of my visits I’ve ordered a cappuccino, which is my standard fare (mostly because I really like cappuccino’s, but also because it’s a good test drink). All have been terrific. 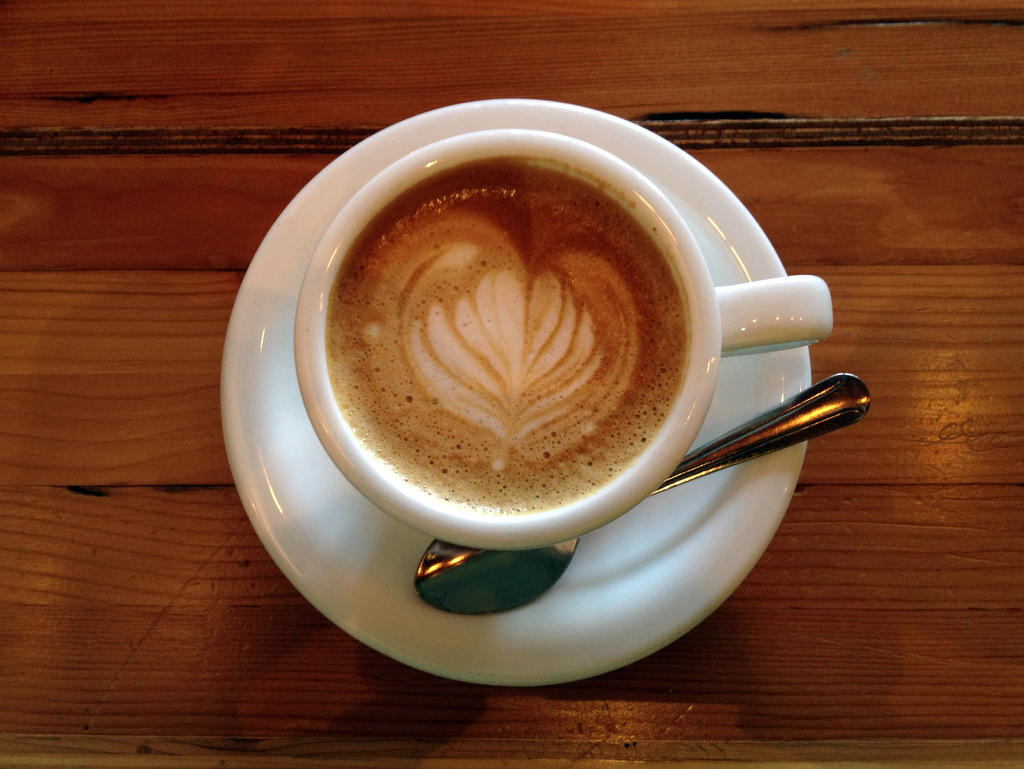 Above: A cappuccino from Songbird

I’ve also tried the iced toddy they make, and it’s super smooth. So they’re winning me right there. 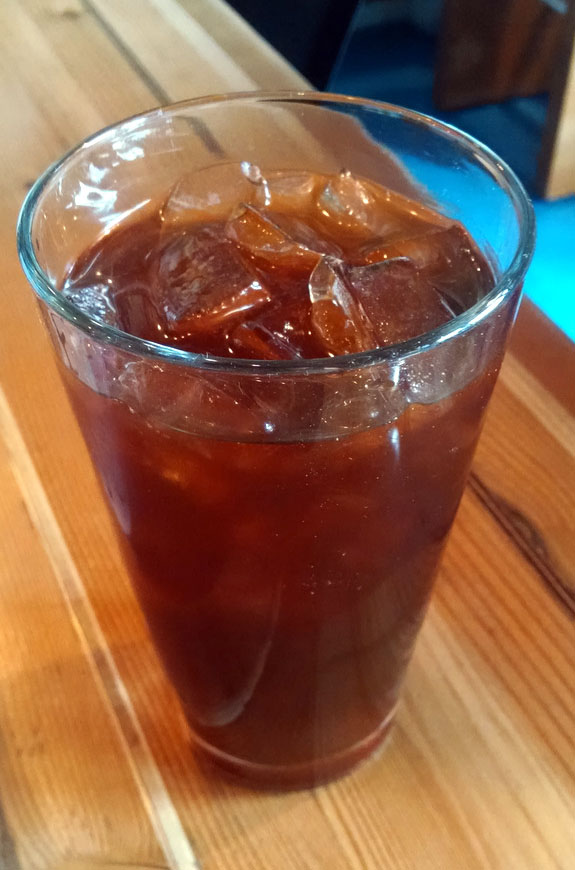 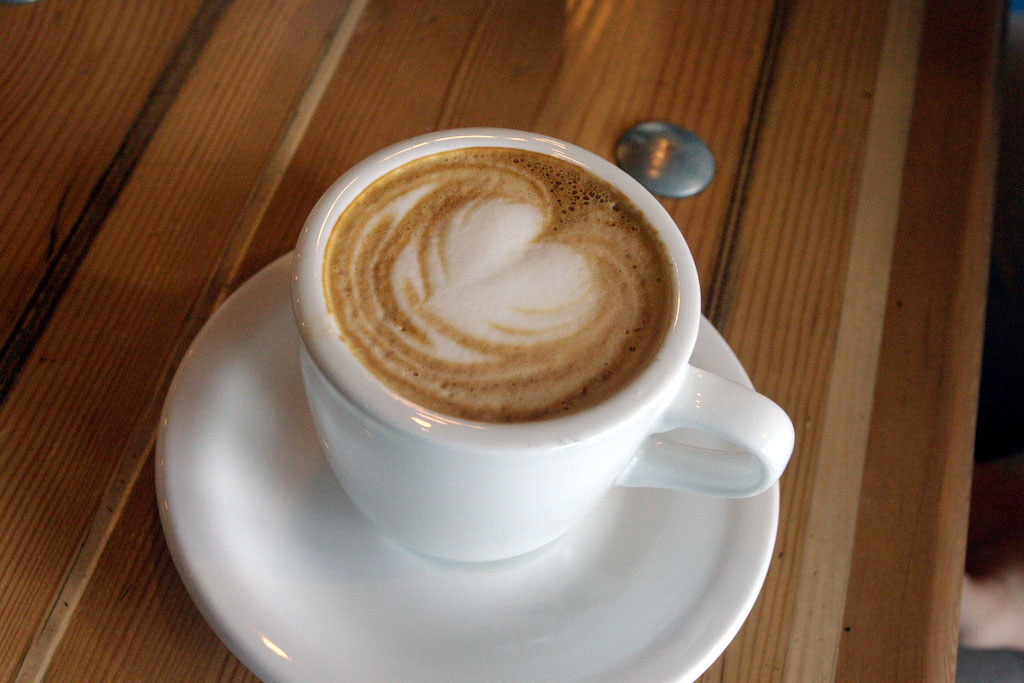 Above: Another cappuccino from Songbird

They don’t serve the waffles every day, but only on select weekend’s. So, if you’re going for the waffles check with Songbird to ensure they’ll have them on the menu.

If you are not familiar with Belgian Liege Waffles here’s what you need to know: They’re like sugar waffles… they are created with a lighter batter and almost taste like a dessert, especially when you top them with fresh fruit and whipped cream. They taste sweet, crispy, and because Liege Waffles are made with pearl sugar, it caramelizes on the outside of the waffle when it is cooked. That’s what gives it the amazing taste. 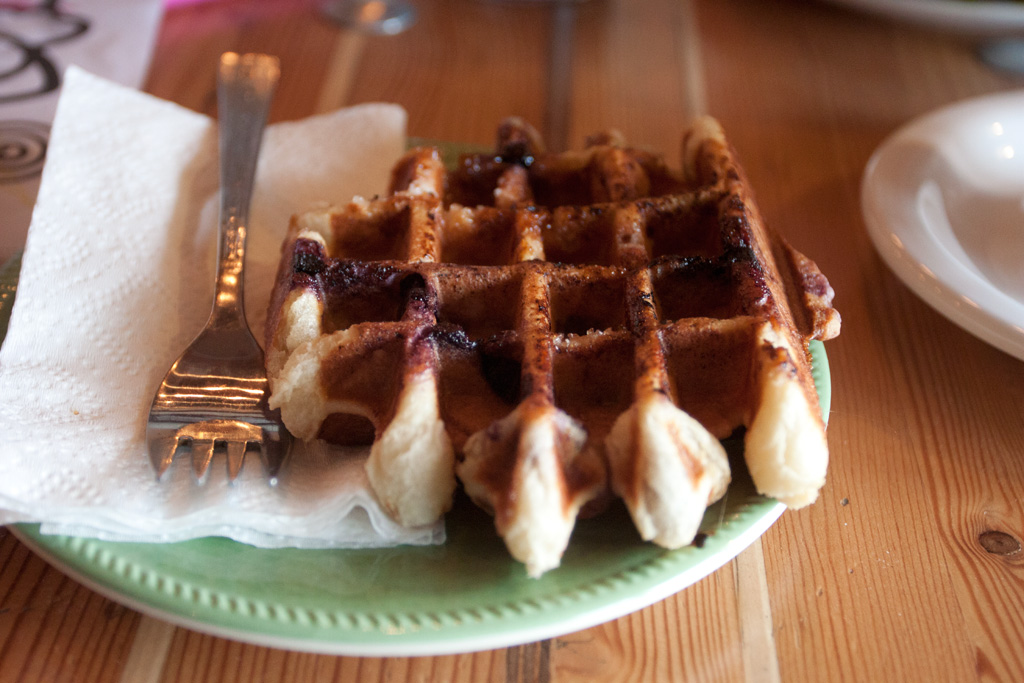 Above: Waffles! You’re sure to love them!

Songbird gets their other food from Treehouse Bakery and Sly Fox Nutrition.

The first time I visited Monorchid was in 2007 for a Creative Connect event and at the time I always thought it was one of the cooler “creative” environments in downtown Phoenix. And, it still is today, but it’s even cooler because they have a fantastic coffee shop inside the walls. 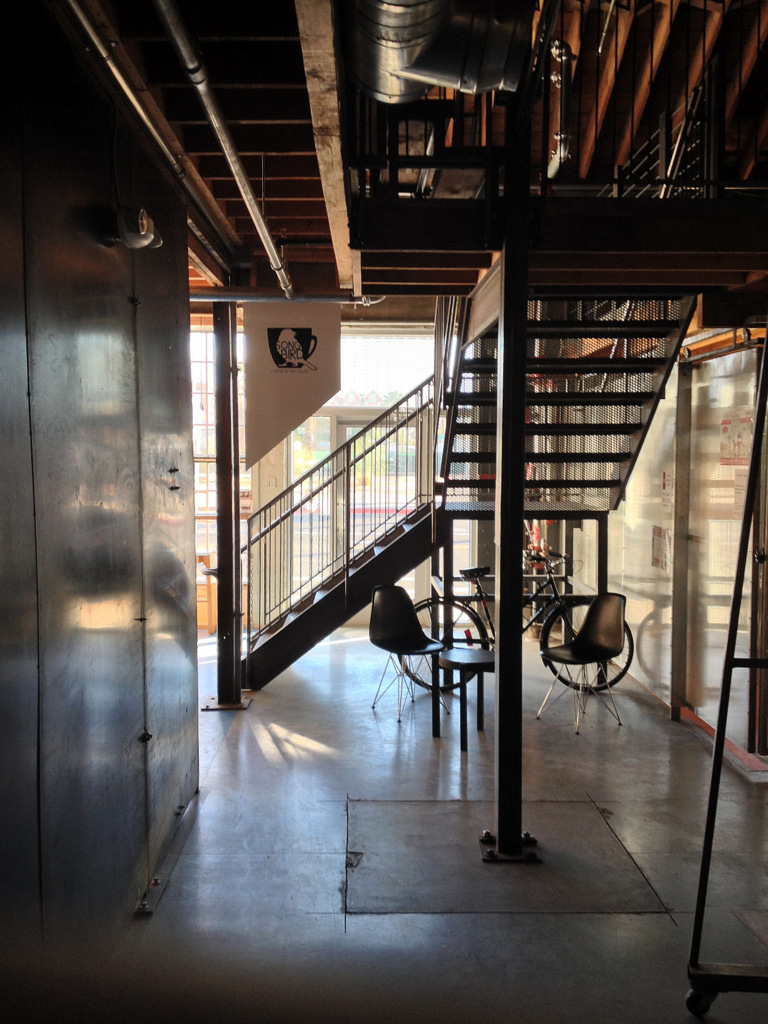 Above: The cozy side entrance from within Monorchid.

One of the reasons Songbird chose to open inside Monorchid was because of their goal to be part of a larger community. They’ve expanded upon that idea by showcasing local art, having regular events, and getting to know their customers.

I’m not much of a tea person, but I’ve heard people talk about the tea at Songbird and refer to it as a terrific place to get tea in Phoenix. People say it’s one of the few places that really knows tea preparation. They also have a Thai iced tea, which people rave about. Songbird gets tea from Maya Tea Company located in Tucson, AZ. 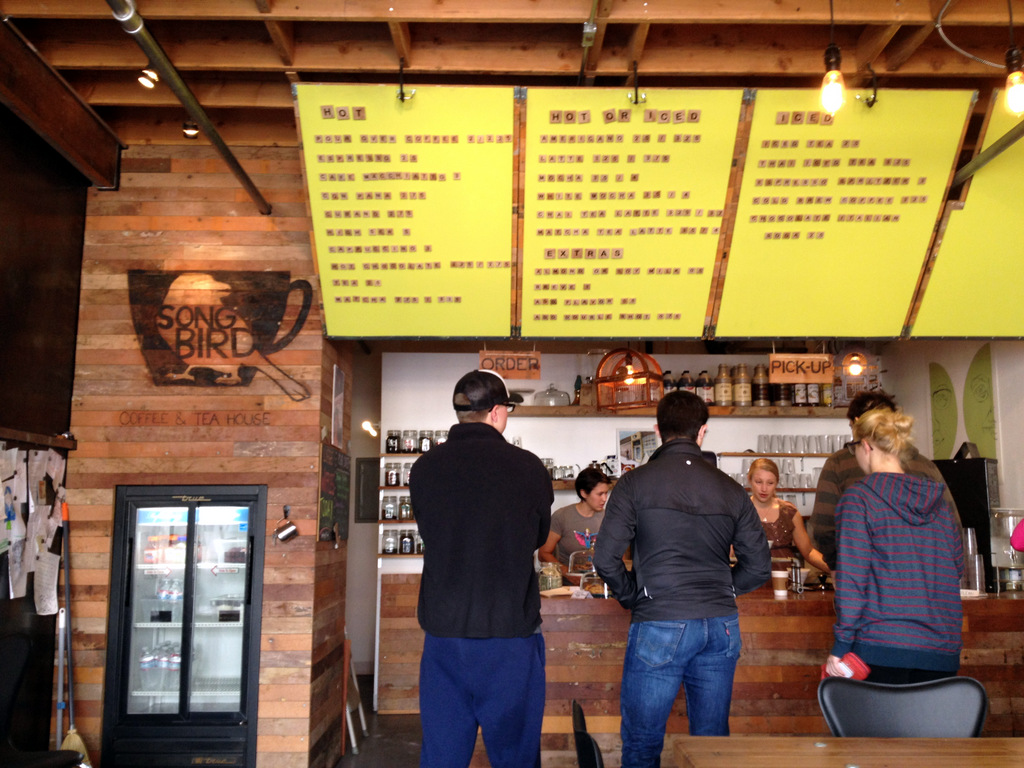 Above: The trademark yellow/green menu board made from Scrabble pieces

Pretty much every single time I’ve visited Songbird I’ve seen one of the owners. Songbird is also transparent about their partners, and list all of the companies that they source from on their web site. 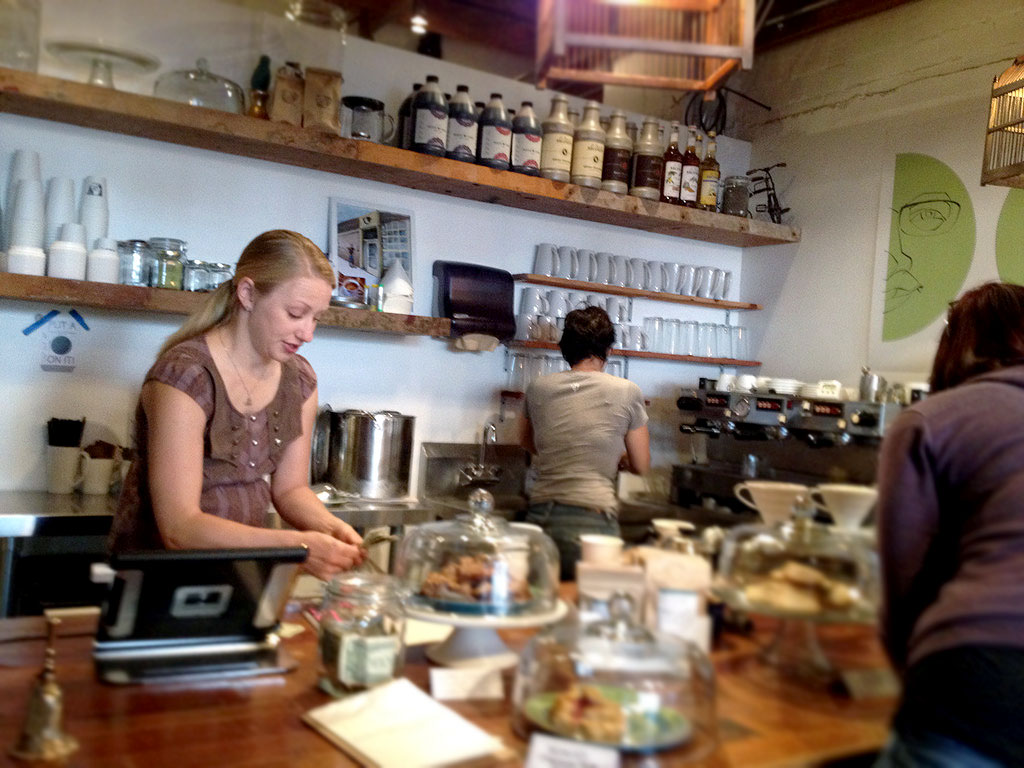 Above: Erin behind the counter

Songbird Coffee & Tea House was founded by Jonathan and Erin Carroll. They opened in July, 2012 at their current location on Roosevelt St.

Jonathan and his wife Erin are very active online. They have recently been posting some cool photos to Twitter that show their Songbird coffee cup at cool venues around Arizona. It reminds me a bit of how Paletas Betty will post photos of their sticker at various venues around the world.

There’s a massive bookshelf inside Songbird that spans nearly the entire wall — perhaps twenty feet. As you sit in your chair, drinking your coffee or tea, you can’t help but look over the items on the wall, and wonder where they all came from. There’s a bird theme, which seems appropriate, and I saw an old bird nest on the top shelf. There’s also dozens of old books that look interesting. If you’re staying a while, they would make for good reading. If you were to find yourself trapped somewhere awhile, Songbird would be an interesting place with enough things to look at that you wouldn’t get bored. 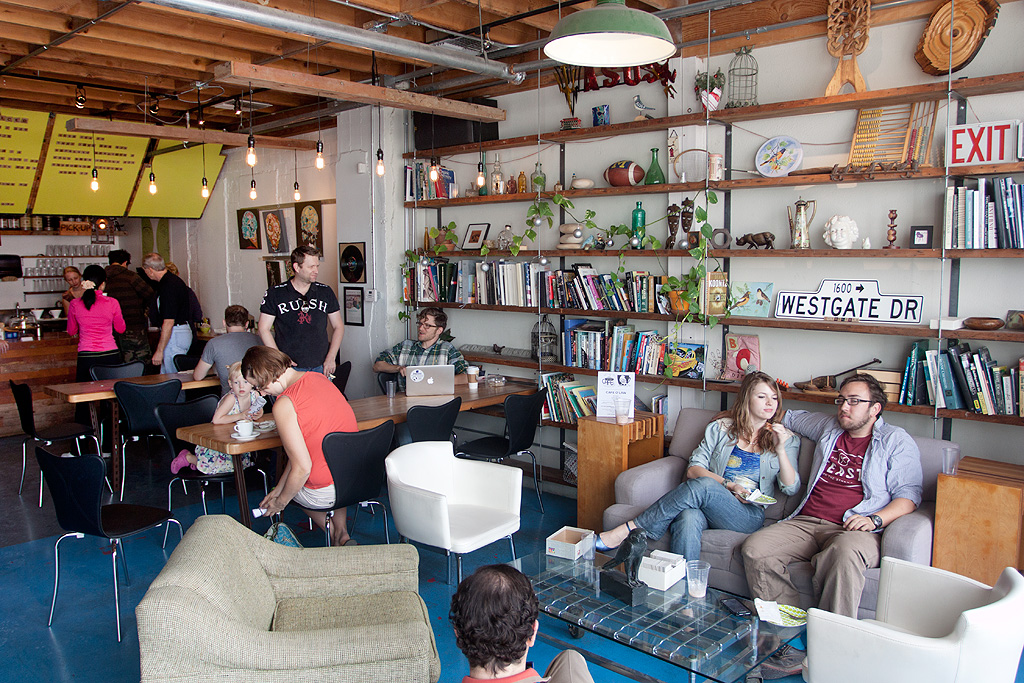 Above: A view of Songbird and the cool bookshelf

The seating is comfortable, with a selection of beautiful chairs and a two-seater couch. The rest of the room is occupied by beautiful wood tables that extend from the walls — they look hand made to me, and have comfortable black chairs. 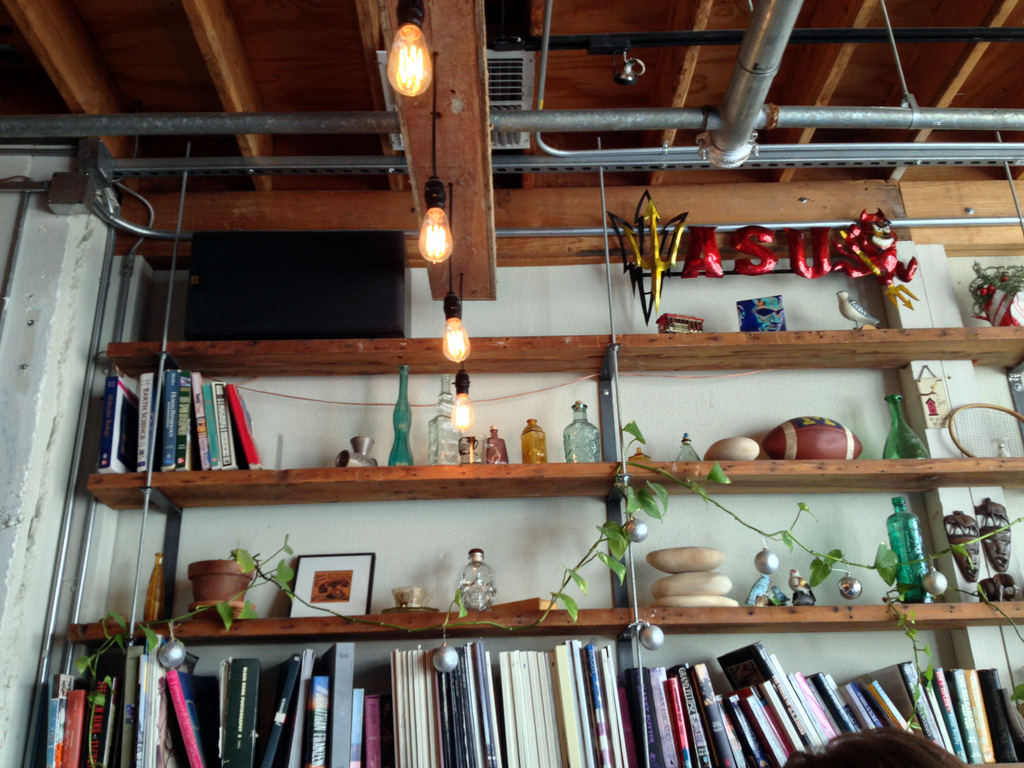 Above: Here’s another close up shot of the shelving

The huge floor to ceiling windows in the front of the store face Roosevelt St. You can sit in front of the windows, looking out at the traffic. 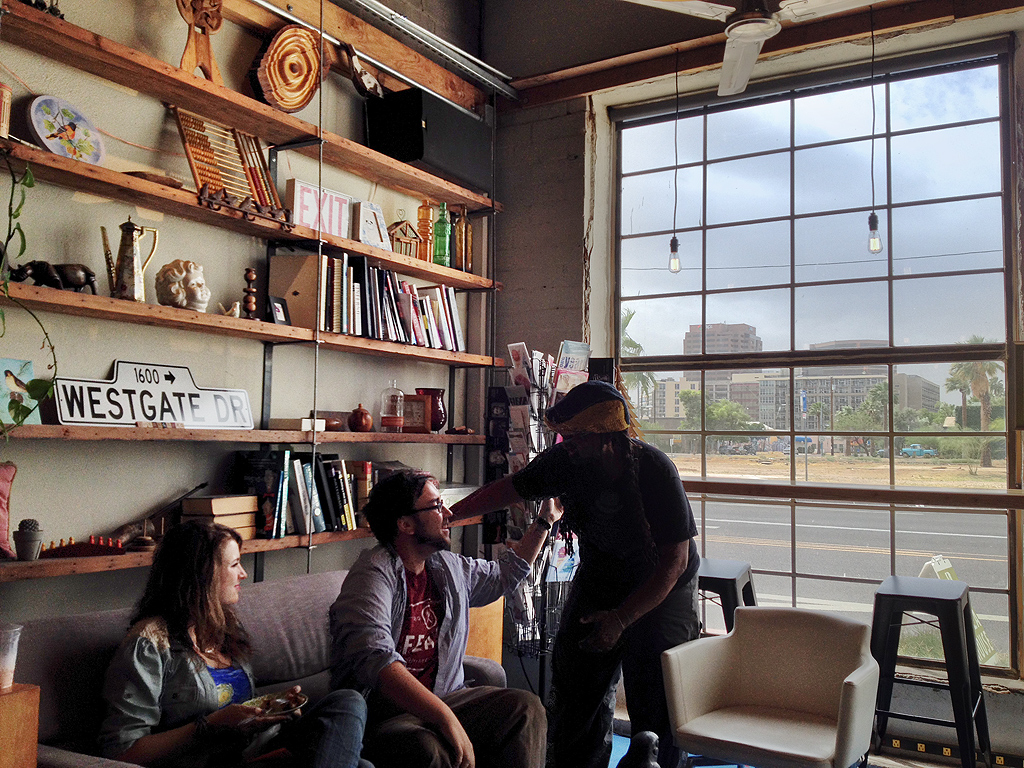 Above: A view out the windows

Have you been to Songbird? What makes it unique? What’s your favorite drink? Have you tried the waffles?